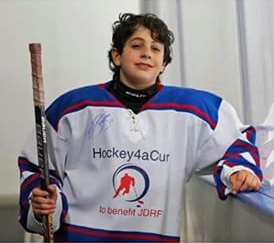 Twenty teams registered for the event with over 120 skaters participating in the day long fun event. The teams were fairly bracketed based upon the current level of each player (AAA, AA, etc.) Each team played a minimum of 3 twenty-minute cross-ice games with a playoff format for each level of play.

Every registered player also got a Hockey4aCure jersey which they could keep, a stenciled bag, and a signed photo of Sabres Captain Brian Gionta along with a Harborcenter T-shirt, some other items and pizza for lunch.

Brian Gionta also made a guest appearance to kick off the tournament. Brian made it a point to visit every team’s locker room to meet all the registered players and he signed anything they wanted.

A Big Thank You to Our Hockey Community and Our Friends that Joined Us in Our efforts to find a Cure thru this event. Together we have raised $40,000 for the JDRF surpassing our original goal of $20,000.